Trade of the week: Gold Waits For Fresh Fundamental Spark

Gold kicked off the week on a positive note as unrest in China over Covid restrictions strained global sentiment. A growing sense of anticipation ahead of the US jobs report along with other top-tier data this week added to the overall caution, leaving investors on edge. With a softer dollar adding to the mix, bulls were injected with enough confidence to challenge levels not seen since November 18.

Nevertheless, the precious metal remains in a wide range on the daily charts with support at $1735 and resistance at $1785. Over the past few weeks, gold has bounced within this range as bulls and bears engaged in a fierce tug of war. 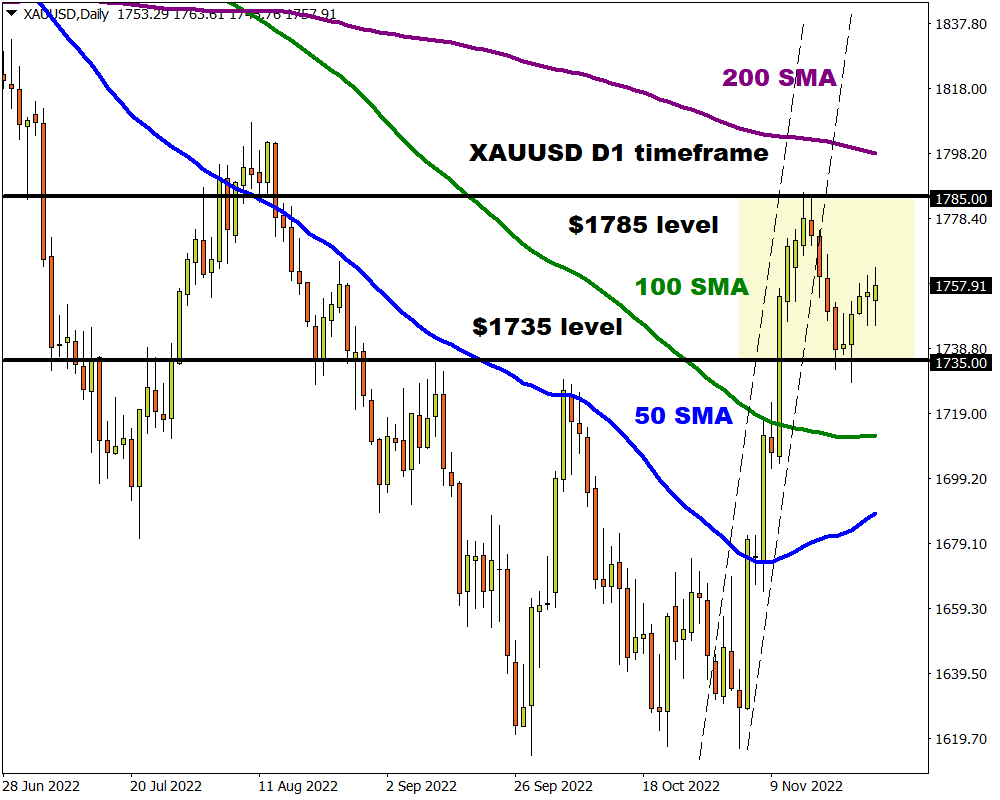 However, with the fundamentals slowly tilting in favour of gold bulls – a solid breakout could be around the corner. Gold needs a fresh fundamental spark to get its gears moving and this could come in the form of speeches from Fed officials, geopolitical risks, or high-quality US economic data.

Before we thoroughly discuss what to expect from gold over the next few days, it is worth keeping in mind that gold is up roughly 8% this month. November will be the first positive month for the precious metal since March 2022! Looking at the technicals, bulls are certainly in the vicinity on the daily and weekly timeframe but things still look choppy on the monthly charts. If the developments and data over the next few days support gold bulls, this could set the tone for December.

It has been a volatile year for gold.

After surging and peaking in March following Russia’s invasion of Ukraine, the precious metal found itself on a slippery decline as the Fed aggressively raised rates to tame inflation. Although gold is down roughly 4% year-to-date, this inflates to almost 15% when measured from the March 2022 high.

Could the precious metal be experiencing a change of fortune after being beaten black and blue for most of this year? Given how the Fed is expected to slow its pace of interest rate increases in the face of cooling inflation, this may lead to a weaker dollar and falling Treasury yields. This combination is nothing but good news for zero-yielding gold which will most likely shine in a low-interest rate environment.

This could be a big week for gold due to the protests in China, speeches from Fed officials including Jerome Powell, and key US economic reports.

Bulls have already made a move on Monday thanks to geopolitical tensions and this momentum could roll over into the next trading session. It may be worth keeping an eye on speeches by New York Fed President John Williams, and St. Louis Fed President James Bullard. There is a lot going on mid-week with Fed Chair Jerome Powell under the spotlight. He is expected to reinforce expectations over the central bank slowing its pace of interest rate increases from December. Such a development may lead to a weaker dollar and falling Treasury yields – resulting in a boost for gold prices. Investors will also be presented with the Fed Beige Book report and US 3Q GDP second estimate which could result in some additional dollar volatility, spilling over to gold.

Thursday sees the release of the US weekly initial jobless claims and most importantly PCE deflator. Much attention will be directed toward the PCE Core Deflator which is the Fed’s preferred measure of inflation. Any signs of cooling inflation will most likely fortify expectations around the Fed adopting a less aggressive approach toward rates.

It’s all about the US jobs report on Friday which could be the real market shaker. Markets expect the US economy to have created roughly 200,000 jobs in October while the jobless rate is expected to remain unchanged. A report that meets or prints below expectations may justify a change in the pace of the Fed’s policy tightening – ultimately supporting gold. 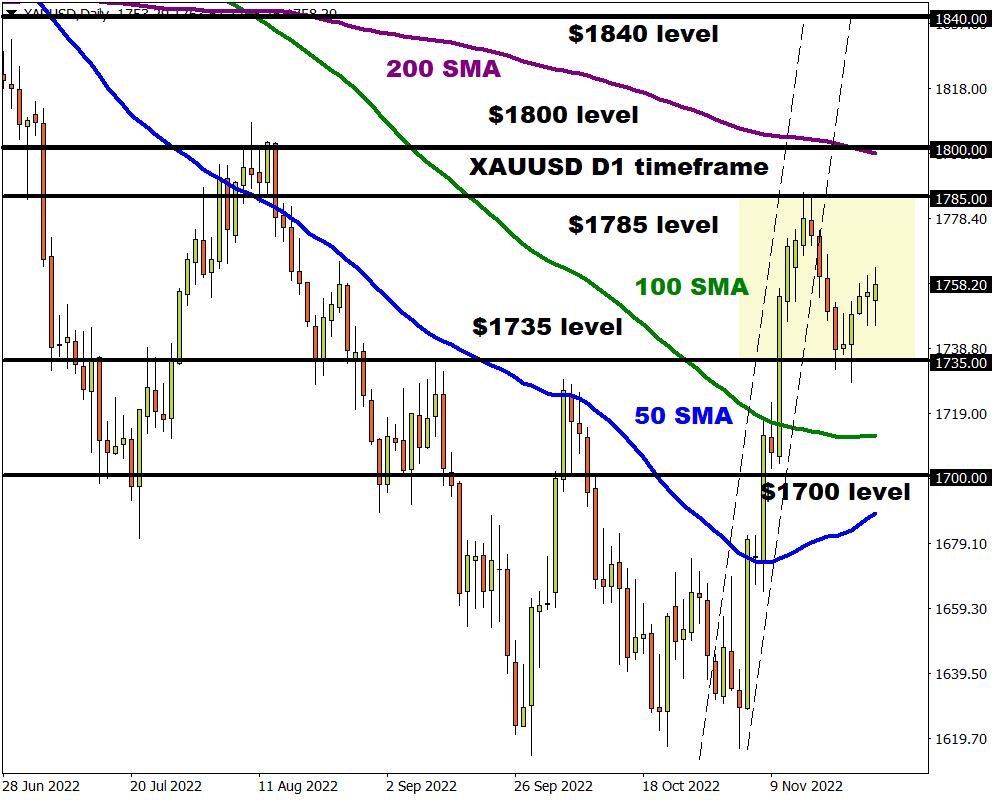