Trade Of The Week: Pound To Be Rocked By Political Uncertainty?

– UK Prime Minister Boris Johnson was flung into the spotlight on Monday after enough Conservative MPs triggered a vote of no-confidence in his leadership.

The British pound immediately hijacked our attention following this development as investors were already concerned over the UK’s worsening economic outlook and post-Brexit tensions. With political uncertainty adding to the toxic mix, one would have expected the pound to collapse like a house of cards – buckling under the strain of negative themes. So far, this news has not had a significant impact on risk appetite with sterling appreciating against the dollar and other G10 currencies!

Taking a quick peek at the technical picture, the GBPUSD has found support around 1.2470 and resistance around 1.2580. On the H4 timeframe, prices are trading below the 50 SMA but above the 100 and 200 SMA. A minor breakout/down could be on the horizon but this may be triggered by political developments. 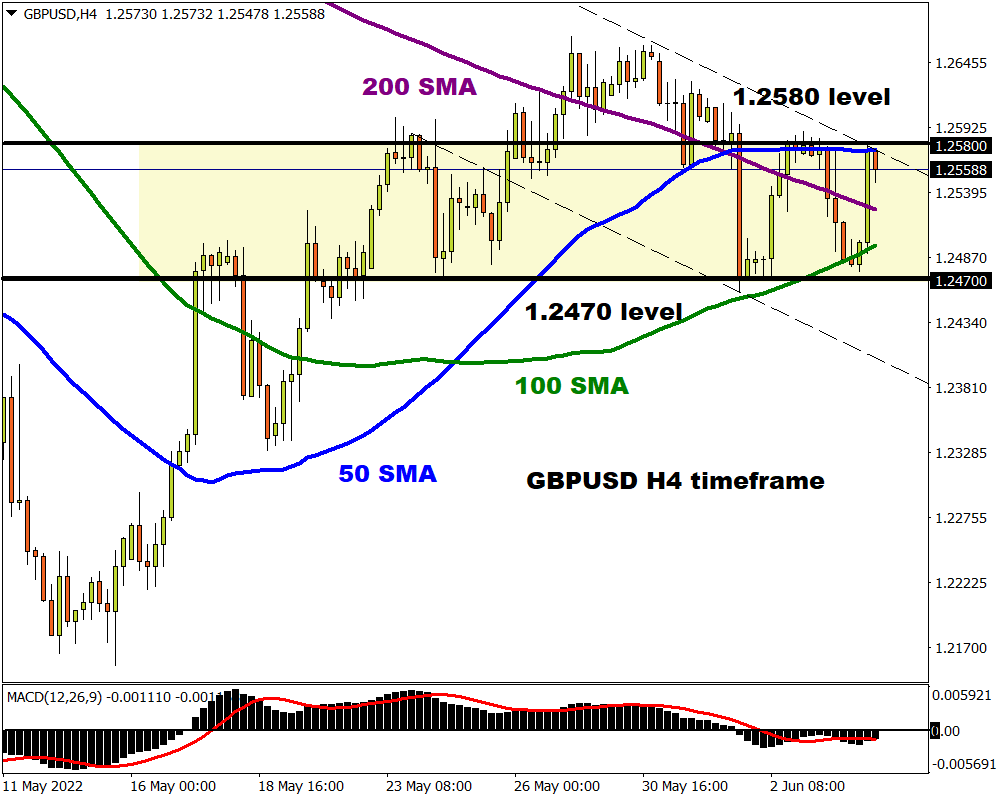 After being booed when he arrived at a service of thanksgiving for Queen Elizabeth’s platinum jubilee last Friday, Johnson just can’t catch a breath.

The Prime minister’s fate will now be decided by a simple secret ballot of MP’s, taking place between 6 pm – 8 pm BST on Monday evening. Under the rules to stay in power, a leader needs to win at least 50% which equals 180 votes. When considering how the vote will be in secret, those who may show loyalty to the prime minister publicly could withdraw their support if they want. Bookmakers are predicting an almost 67% chance that Johnson will win today’s vote. If such a scenario becomes reality, there will not be another confidence vote for the year – removing a layer of political uncertainty and possibly offering sterling support.

What if Johnson losses no-confidence vote?

If Johnson losses the vote among the 359 Conservative lawmakers, the party will be forced to choose a new leader who will also become prime minister. The initial shock and uncertainty from such a development could trigger a sharp selloff in the pound. According to bookmakers, Jeremy Hunt and Liz Truss are favourites to replace Boris Johnson.

Enough of the politics…

We expect the pound to remain influenced by economic data and BoE rate hike expectations.

As highlighted earlier, market players remain concerned over the UK’s economic outlook with untamed inflation adding insult to injury. Back in April, inflation jumped to 9% – its highest level since 1982 thanks to rising prices for electricity, gas, and motor fuels. Further signs of rising prices may continue to dampen confidence over the UK’s growth outlook, capping the pound’s upside gains. On Tuesday, all eyes will be on the final services PMI figures for May for could provide additional insight into the health of the UK economy. Despite the shaky economic conditions, the Bank of England is expected to raise interest rates by 25 basis points at the next monetary policy meeting on June 16.

It may be worth keeping an eye on the US inflation report on Friday which is expected to show consumer prices unchanged at 8.3% in May, matching the figure seen in April. If the report meets or falls below expectations, this may suggest that US inflation may have peaked. Such a development could fuel speculation around the Fed taking a step back from its ultra-aggressive stance – weakening the dollar. A weaker greenback has the ability to the push the GBPUSD higher.

Time for the GBPUSD to breakout?

After trading within a range for the past three weeks, the GBPUSD could be gearing up for a major breakout/down.