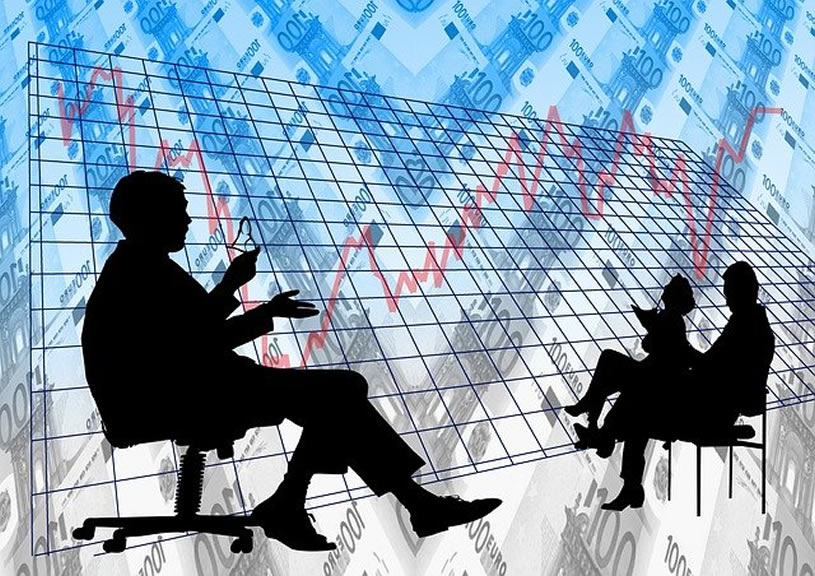 – The Philippine presidential election is only days away. The highly popular president Duterte is likely to be succeeded by “Bongbong” Marcos, who will build on his legacies.

Almost everything you have heard about the Philippines in the past six years is fake news.

Here’s the standard narrative: In 2016, Rodrigo Duterte won a landslide victory in the Philippines. The strongman’s violent drugs war has devastated the country. His appeasement of China has derailed Manila’s foreign policy. In the 2022 election, the likely victory of ex-dictator Marcos’s could further destabilize the status quo.

Here’s the real story: During their three decades of reign, the Philippine liberals failed the People Power Movement by fostering the fortunes of the oligarch dynasties. In the 2010s, drugs were killing the poorest neighborhoods, corrupting politics and giving rise to “narco-generals”. Hence, Rodrigo Duterte’s landslide victory in the 2016 election and the subsequent US regime change efforts

Despite pandemic devastation, Philippine economy has expanded in the Duterte era, while foreign investment has taken off. Duterte enjoys higher trust in the country than any other Philippine president. The Marcos-Duterte campaign will build on his legacies.

Despite legal and political ploys against his campaign and assassination threats against his life, ex-senator “Bongbong” Marcos, the son of the controversial ex-president Ferdinand Marcos (1965-86), has consolidated his lead in the presidential polls (currently 57% of preferences). (Figure 1)

After the 2016 meltdown of the Liberal Party (LP), its aging stalwarts have promoted “Leni” Robredo (23%), the incumbent vice president. But the effort to sell the polarizing her as a “unity candidate” has failed. And other candidates attract only marginal support.

As the share of the undecided has shrunk, Marcos is the effective winner, assuming no last-minute political drama. Similarly, his political partner, Davao City mayor Sara Duterte-Carpio, the daughter of the incumbent president, dominates the vice-presidential campaign (58%).

The Marcos-Duterte campaign benefits from a vital regional “lock.” As the former governor of Ilocos Norte province, Marcos has a strong foothold in the north. Duterte dominates the south. And both are highly popular in Metro Manila.

Through her campaign, Leni Robredo has hoped to re-rebalance Manila toward Washington. In this quest, she has been supported by ex-Supreme Court Justice Antonio Carpio, the vocal proponent of the “West Philippine Sea,” and ex-foreign secretary Albert Del Rosario, a millionaire businessman-politician. They are the key players in the liberal anti-China coalition.

These efforts have been fostered by Del Rosario’s “think-tank” ADRi. whose parent Stratbase is linked with the US-based Bower Group Asia and the Washington-based Center for Strategic and International Studies (CSIS), which is funded by the US defense contractors. ADRi has tried to “make China the issue of 2022.”

When Rosario served as foreign secretary, the Philippines filed the arbitration case against China. It was followed by the 2014 Enhanced Defense Cooperation Agreement (EDCA), which re-opened the country to US military, ships, and planes.

Today, the US-Philippines Visiting Forces Agreement (VFA) is back in effect, thanks to foreign minister Lacson, Philippine US Ambassador Romualdez, Carpio, Rosario and certain oligarch support. Last fall, Locsin welcomed the new trilateral security pact between the US, UK and Australia (AUKUS), which violates the Southeast Asian Nuclear-Weapon-Free Zone Treaty. Philippines also agreed to hold over 300 military activities with the US in 2022.

Effectively, Robredo’s campaign is something of a proxy effort. It is supported by media that portray themselves as “independent,” yet are funded by the National Endowment for Democracy (NED), which is financed largely by US Congress.

According to the NED database, several Philippine media have received funds in the past 3-5 years, around $330,000-$430,000 each, including Rappler, Center for Media Freedom and Responsibility (CMFR), Philippine Center for Investigative Journalism (PCIJ), and to a lesser degree Mindanews. Since local per capita incomes are less than 5% of those in the US, the funds employ hundreds.

However, these funds make up only $1.3 million of NED’s total Philippine awards ($6.8 million). Some $4.5 million of the NED total goes to non-media organizations, including the “Young Leaders for Good Governance Fellowship” (YLGGY), which has netted $300,000. In the Philippines, it is depicted as a program of the Jesse Robredo Foundation, which honors Robredo’s late husband and is controlled by her family members. In the US, the YLGGY is promoted as a project of the International Republican Institute (IRI), one of the NED’s four subsidiaries. It is thus not entirely clear whose national interest the YLGGY represents.

Indeed, despite stated transparency, these organizations and their money flows are clouded by murkiness (Figure 2). 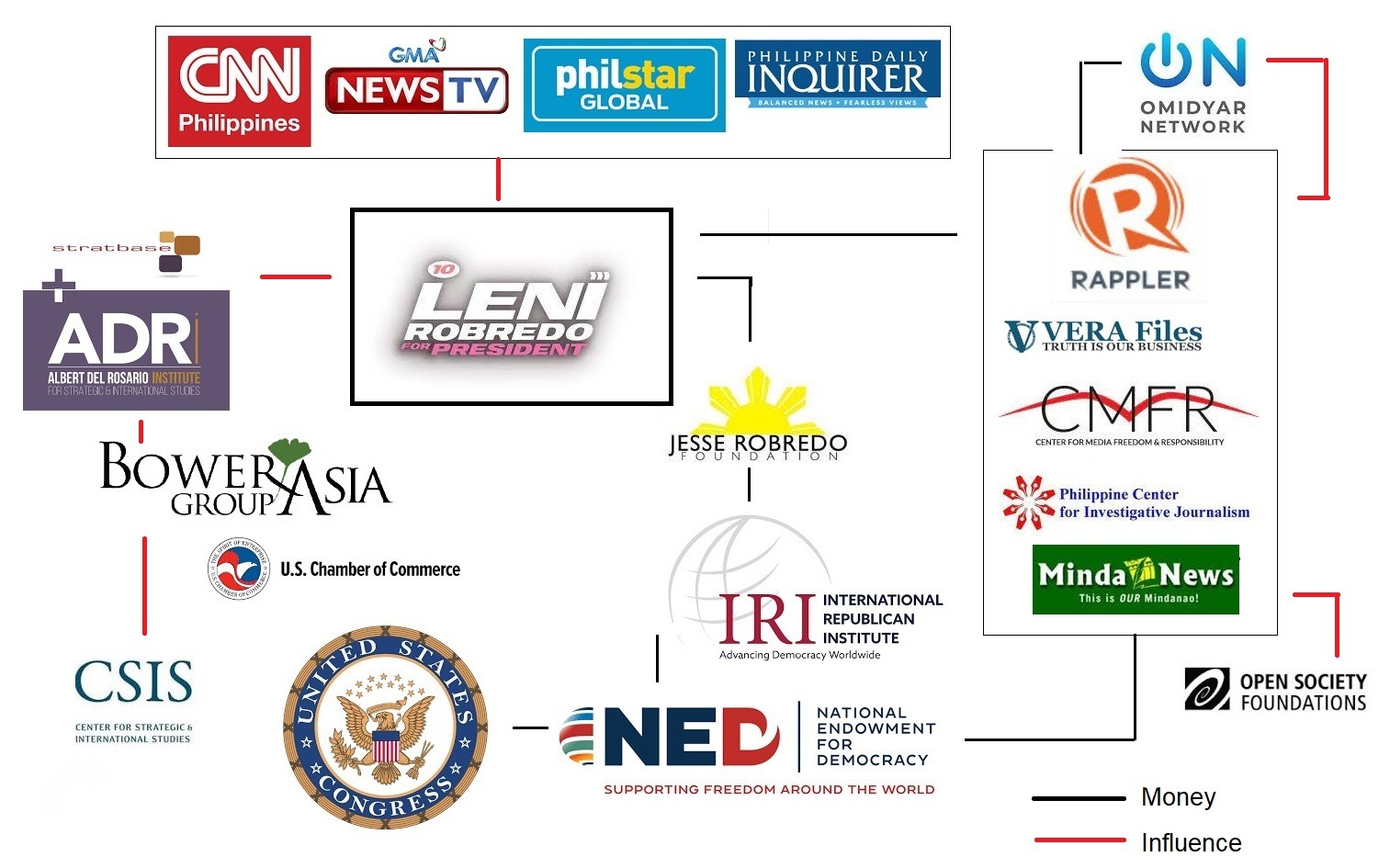 US government funds are only a part of the proxy monies. Along with billionaire investor George Soros’s Open Society initiatives, other private “philanthropies” play a role as well. Rappler has been financed by the secretive billionaire Pierre Omidyar, a supporter of “pro-democracy” regime-change in several countries. In addition to media exposure by the NED-funded media, the Robredo campaign has been fueled by CNN Philippines, Philippine Star, Philippine Daily Inquirer and other media, owned by local oligarchs or family dynasties.

Reportedly, the Robredo campaign has also cultivated ties with far-left insurgents (which it has vehemently denied), waging decades-long war against the Philippine government.

In foreign policy, Marcos and Duterte would retain military ties with the United States. However, they also plan to continue to recalibrate the economic relationship with China, which has become the Philippines’ largest trading partner, the second largest foreign investor, and the second largest source of foreign tourists.

Eager to avoid military entanglements, Marcos favors non-confrontational stance with China. Overall, he wants to treat other countries as “friends and hopefully allies.”

Marcos and Duterte support regional integration with their Southeast Asian peers. They stress Philippine interests in South China Sea but also the ASEAN talks with China hoping the bilateral regional Code of Conduct (COC) would be completed soon.

The two shun the kind of rearmament drives and nuclearization that would undermine efforts at accelerated economic development in the region.

At this point, only foul play could change the expected outcome. There are concerns about the integrity of the Commissions on Elections (Comelec) and its election technology, which suffered a huge data breach in January that could affect the election.

Through Mark Malloch Brown, odd links prevail between billionaire investor George Soros’s Open Society Foundations (OSF), Soros Fund Management, and Comelec’s election software (Smartmatic). In 1986, Malloch Brown led Corazon Aquino’s campaign against Ferdinand Marcos and his ties have remained close with the Aquinos since then. He is president of both the US-based OSF and chairman of Smartmatic.

The big question is whether the Philippine future will be driven by military pacts, which benefit just tiny economic elites, or peaceful development, which fosters the living standards of most Filipinos.

Rising prosperity is only viable through peace and stability.