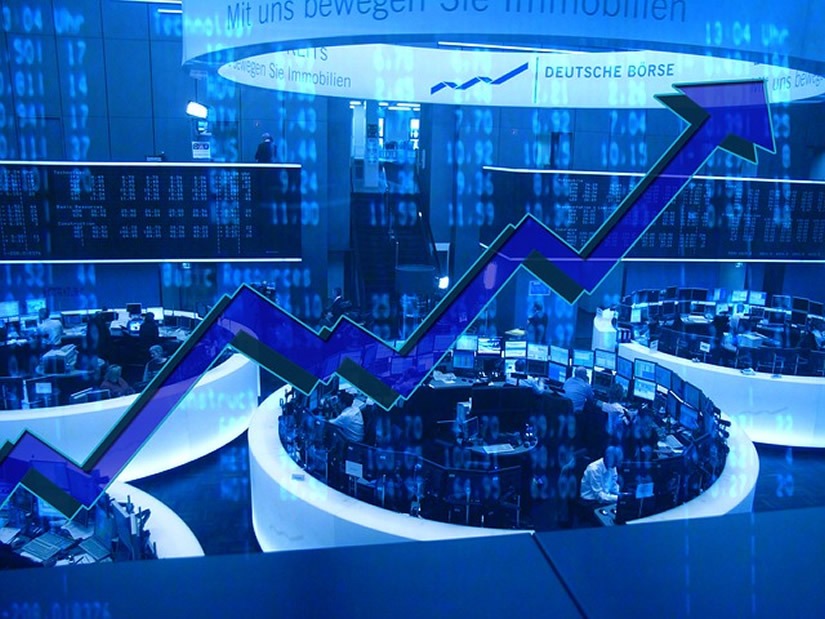 The first part of the Cambridge dictionary’s definition of “parabolic” is: “having a type of curve like that made by an object that is thrown up in the air … .”

It’s not straight up vertical but the trajectory is steep. Many investors have seen charts of financial markets which show such a parabolic rise.

Now, let’s add the second part of the Cambridge dictionary’s definition to the first part: “having a type of curve like that made by an object that is thrown up in the air and falls to the ground in a different place.” [emphasis added]

Indeed, many investors have seen how this second part also applies to the price charts of financial markets at times.

The September 2019 Global Market Perspective, an Elliott Wave International monthly publication which covers 50-plus worldwide financial markets, called attention to a parabolic rise in the stock price of the London Stock Exchange Group (LSE). Here’s the chart and commentary: 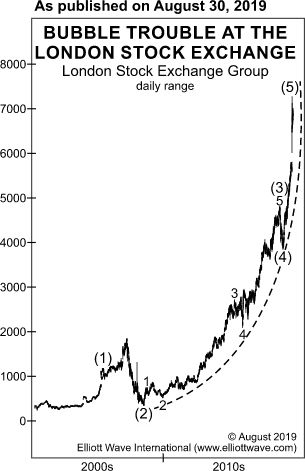 The London Stock Exchange Group has been riding along an upward parabolic curve that has generated a 20-fold increase in the stock price since the late 2000s. Parabolic advances are inherently unsustainable, and this one is even more precarious given that we can count five waves up since the LSE’s public debut.

As you may know, the completion of five-waves — up or down — signals the start of a new trend, which, in this case, would be down.

Well, here’s an update on the price path of LSE from the April Global Market Perspective: 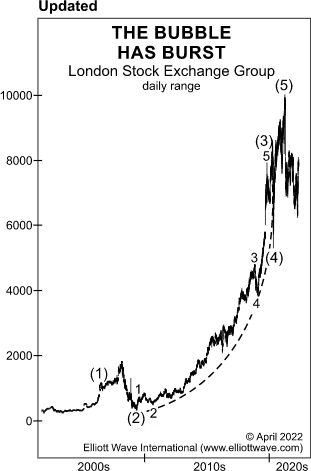 The cited fifth wave turned out to be Minor wave 5 of Intermediate wave (3), one degree smaller than we originally anticipated. Intermediate wave (4), the ensuing decline, initially bounced off support, and [Intermediate] wave (5) completed an ending diagonal at 10,010 on February 16, 2021. [Afterwards], LSE Group dropped 30% in six weeks, and a countertrend rally peaked in June 2021.

You can delve into the details of how to apply the Wave Principle to your analysis of financial markets by reading Frost & Prechter’s Wall Street classic, Elliott Wave Principle: Key to Market Behavior. Here’s a quote from the book:

After you have acquired an Elliott “touch,” it will be forever with you, just as a child who learns to ride a bicycle never forgets. Thereafter, catching a turn becomes a fairly common experience and not really too difficult. Furthermore, by giving you a feeling of confidence as to where you are in the progress of the market, a knowledge of Elliott can prepare you psychologically for the fluctuating nature of price movement and free you from sharing the widely practiced analytical error of forever projecting today’s trends linearly into the future. Most important, the Wave Principle often indicates in advance the relative magnitude of the next period of market progress or regress. Living in harmony with those trends can make the difference between success and failure in financial affairs.

Here’s the good news: You can read the entire online version of the book for free once you become a Club EWI member.

In case you’re unfamiliar with Club EWI, it’s the world’s largest Elliott wave educational community and is free to join. More than that, members enjoy free access to a wealth of Elliott wave resources on investing and trading.

Just follow the link to get started right away: Elliott Wave Principle: Key to Market Behavior — free and unlimited access.

This article was syndicated by Elliott Wave International and was originally published under the headline London Stock Exchange… Stock: Predicting the Collapse of a “Parabolic Rise”. EWI is the world’s largest market forecasting firm. Its staff of full-time analysts led by Chartered Market Technician Robert Prechter provides 24-hour-a-day market analysis to institutional and private investors around the world.

Financial News Stock Market News
← The New “Social Movement” Surrounding Cryptos — and What It May Mean
Sri Lanka’s economic crisis is a chance to reinvent international bailouts so that citizens don’t take most of the pain →
Latest Articles: