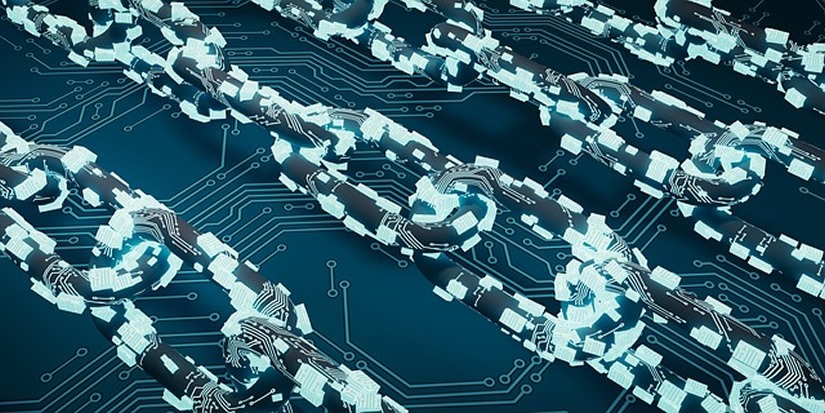 Advance warnings about the recent crypto crash were there all along.

How did almost everyone miss them?

Anyone on Planet Earth in 2021 knows about the rise and fall of digital currencies.

Even many kids are aware.

But what has baffled just about everyone is what’s BEHIND the moves.

This was made especially clear by the recent cryptocurrency crash, which saw Bitcoin plunge 50% from its April 15 peak. That move alone eliminated $1.3 trillion of wealth.

Days are lit powder kegs; like June 22, when Bitcoin plummeted below the $30 k level to erase its entire 2021 gains before recovering 24 hours later.

“… It’s just stupid. I’m never going to have as much invested in crypto again.”

Another June 9 UK Independent article led its pages with: “Crypto Market Faces ‘Moment of Truth’ After Crash Wipes Value from Ethereum and Dogecoin.” It said the plunge had two causes:

Yet, a bit of analysis shows that the peak had been registered almost a month BEFORE the Musk and China announcements.

In fact, as decades of historical research have shown, financial markets are NOT driven by external events like these. Rather, they are driven by recurring waves of optimism and pessimism among investors, traders and society at large.

That’s great news. It means that knowledgeable investors can predict the waves, and therefore market prices, to a surprising degree.

The “Crypto Trading Guide: 5 Simple Strategies to Catch the Next Opportunity” summarizes how the Elliott Wave Principle works. It is based on these facts:

When you know which Elliott wave a market is in, you can forecast what’s coming next. This gives Elliott wave traders and investors a very important advantage.

Here’s just one recent example. Weeks before Musk’s May 12 tweet and China’s May 18 bitcoin ban, the Elliott Wave Financial Forecast predicted the top in cryptos was near. It showed subscribers several charts, including this one highlighting Paul Montgomery’s famous Magazine Cover indicator. 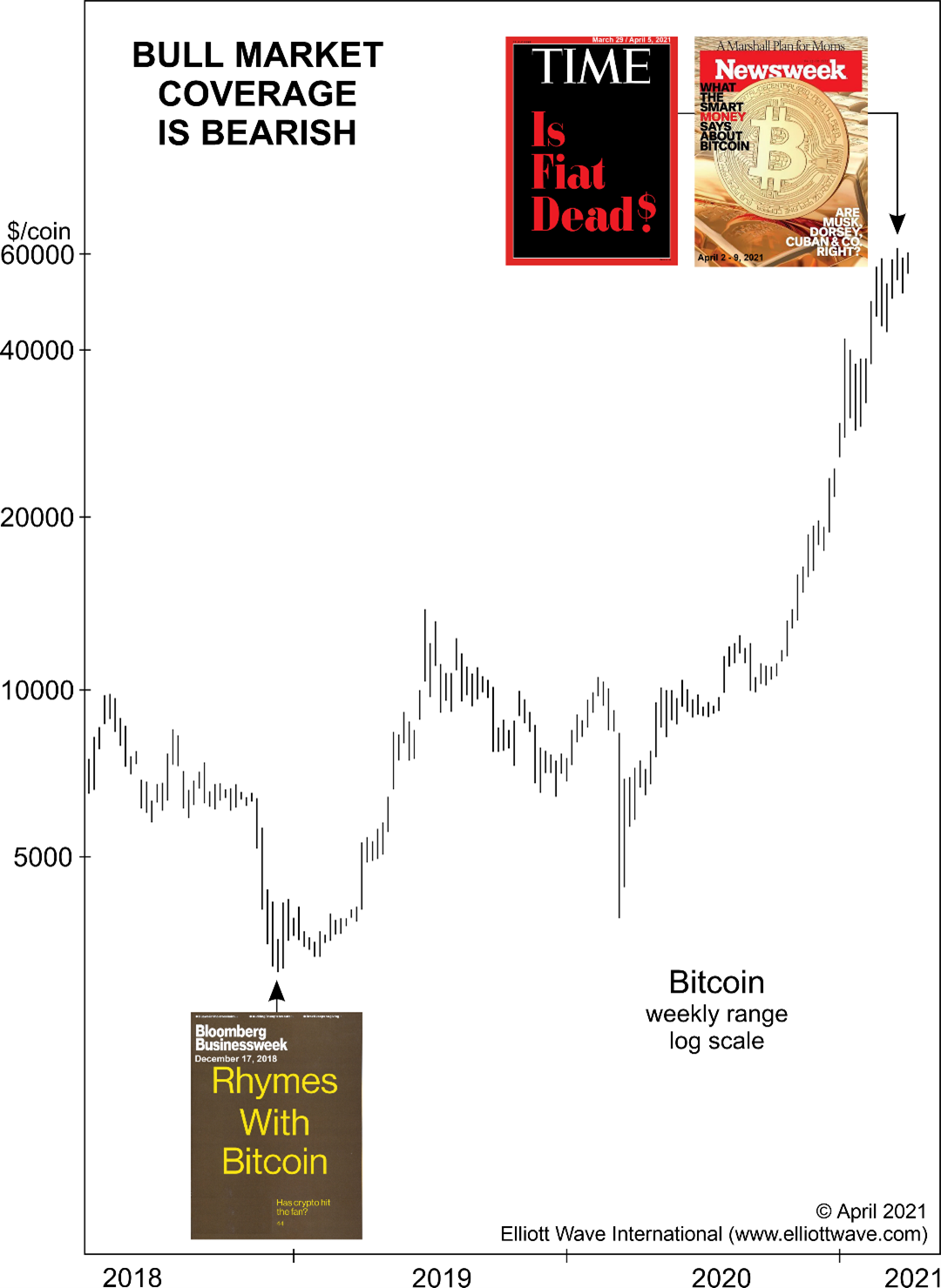 The Magazine Cover indicator… postulates that when a financial trend is established enough to reach the cover of a general interest news magazine, which is rare, that trend is near exhaustion.

The magazine cover at the top of bitcoin’s long rise is from the latest issue of Newsweek. The story says that ‘The Smart Money’ is betting on bitcoin.

Bitcoin’s susceptibility to such a signal is clear from the ‘Rhymes With Bitcoin’ BusinessWeek cover at the bottom of the chart. As The Elliott Wave Theorist noted on December 21, 2018, the negative appraisal appeared a few days from bitcoin’s December 14, 2018 low. 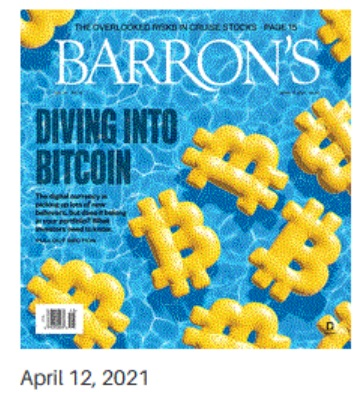 Barron’s magazine put bitcoin on its cover over the weekend. On Wednesday, April 14, Coinbase, ‘the fastest-growing exchange at the center of the speculative frenzy in cryptocurrencies,’ (Bloomberg, Apr. 12) will issue an IPO with an expected valuation of $100 billion, more than the New York Stock Exchange and the NASDAQ combined.

Bullish sentiment toward cryptocurrencies, and in particular bitcoin, is extreme and compatible with a change of trend.

This bearish bitcoin analysis was only the beginning of how Elliott waves predicted cryptos’ top and then, early in the plunge, identified it as a crash. The May 2021 Financial Forecast said “evidence of market-peak psychology” in Dogecoin amounted to “a perfect setup for a bet against” the altcoin.

In the May 5, 2021 Crypto Pro Service, Elliott wave experts posted a Special Update on Dogecoin. It evaluated the extreme optimism surrounding the market. The message was clear:

FOMO (Fear of Missing Out) is out of hand as people try to catch up here and jump in because of the huge percentage moves that Dogecoin is making.

We do think a crash in prices is very likely. At its current reading, Dogecoin has entered extreme overbought territory.

As with the Financial Forecast’s analysts, Crypto Pro Services’ analysts had used Elliott waves to predict massive run-ups in digital currencies prior to the top.

The extreme psychology in DOGE coincided with a mature Elliott wave pattern; namely, a five-wave impulse. The “Crypto Trading Guide: 5 Simple Strategies to Catch the Next Opportunity” report shows this structure:

The market’s progression unfolds in waves. …progress ultimately takes the form of 5 waves… 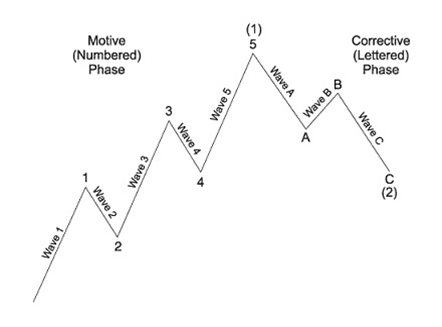 In the May 5 Crypto Pro Service, analysts showed a chart of DOGE with a clearly completed five-wave impulse. 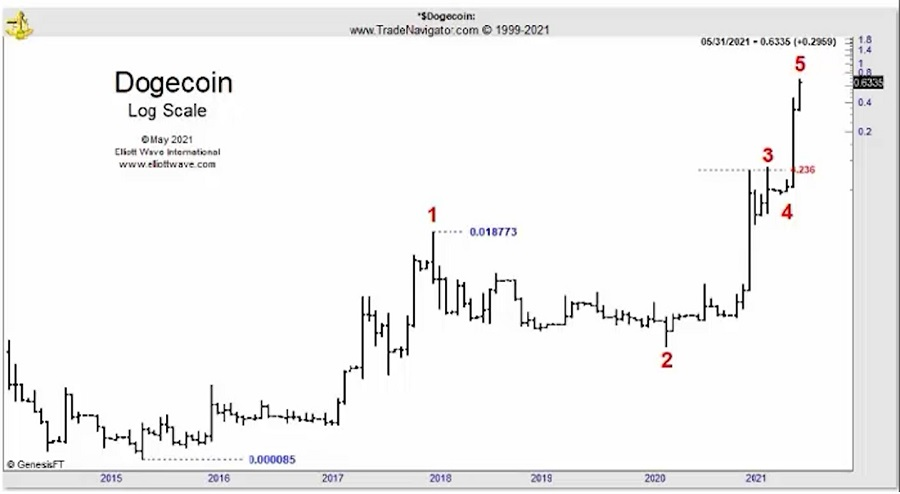 When fifth waves crash, the crash is very substantial.

Why We Are Here

Economist Milton Friedman made this prediction about the rise of a universally adopted digital currency:

I think that the Internet is going to be one of the major forces for reducing the role of government. The one thing that’s missing, but that will soon be developed, is a reliable e-cash method whereby on the Internet you can transfer funds from A to B without A knowing B or B knowing A.

Friedman made that prediction in 1999. He nailed the reason bitcoin and other cryptocurrencies were later invented.

What he didn’t necessarily see was the wild fluctuations in sentiment that came to surround the digital coins.

Before the recent meltdown, mainstream experts extolled cryptos as better than “gold” and said “Bitcoin Is the Only Sound Money” (April 23 Medium).

Again, these comments make a sound point about the utility of bitcoin and other cryptos.

The wisdom of investing in them is another matter entirely. In markets where emotion is such a significant component, Elliott waves are massive — and fortunes can be made and lost, literally, in a few moments.

Investors have a choice. They can fall victim to the waves of sentiment surrounding the coins. Or, they can use the waves to their advantage — predicting them, in both directions, and responding objectively.

For Crypto Traders and Just “Crypto-Curious”…

When it debuted in 2009, one Bitcoin was worth ~0.5 a cent. By 2011, it suffered one blow after another, from hacking and theft, and remained currency-non-grata to most of the world.

But the contrarians at Elliott Wave International saw Bitcoin’s potential as early as 2012; quote:

“Presuming Bitcoin succeeds as the world’s best currency — and I believe it will — it should rise many more multiples in value over the years.”

Result: What happened next… well, you already know.

The question is, how do you ride Bitcoin’s upcoming twists and turns? (And there will be many!)

This article was syndicated by Elliott Wave International and was originally published under the headline Meet SuperMania and its Ever-Present Sidekick, SuperMeltdown. EWI is the world’s largest market forecasting firm. Its staff of full-time analysts led by Chartered Market Technician Robert Prechter provides 24-hour-a-day market analysis to institutional and private investors around the world.

Cryptocurrencies Opinions
← How will EURUSD be impacted by the dollar surge?
USDCHF 0.873 Likely To Complete Global Cycle Trend →
Latest Articles: