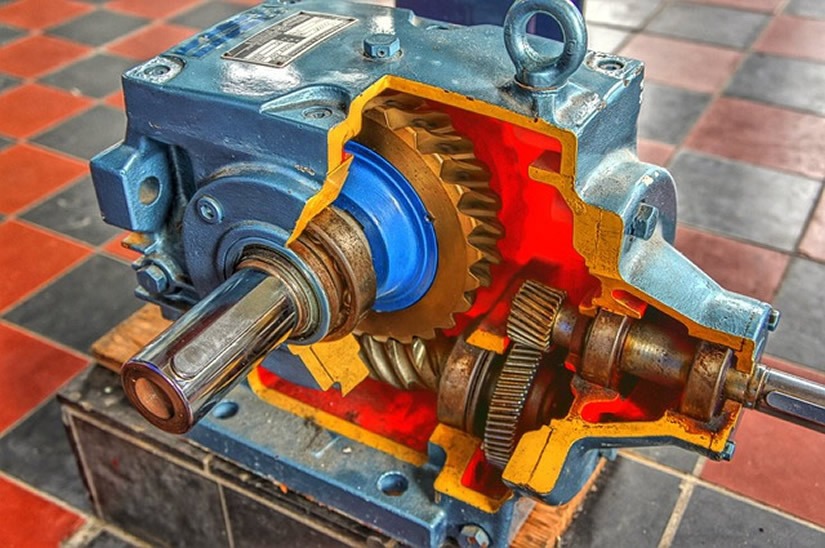 This Tech Trailblazer Is Recycling Platinum & Palladium From Catalytic Converters

Small tech company Mineworx has partnered with a Tennessee recycling company to extract platinum and palladium from diesel catalytic converters in a ground-breaking method that bypasses smelting, a major polluter. 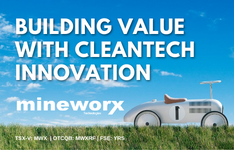 This year in New York City, 2,200 car owners climbed into their vehicles, clutching their morning coffee, and turned the ignition key only to hear the deafening roar of a Russian tractor.

That’s what a Toyota Prius sounds like when a thief has ripped out the catalytic converter — an important part of the car’s exhaust system.

“Catalytic converter theft, a crime that has been happening for decades, is surging as thieves take advantage of a spike in the prices of rare metals contained within the automotive devices,” reported USA Today.

Two of the key rare metals found in catalytic converters are palladium and platinum.

Mineworx Technologies Ltd. (MWX:TSX.V; MWXRD:OTCQB; YRS:FSE)
is a precious metal extraction company focused on the extraction of platinum and palladium from diesel catalytic converters along with its partner Davis Recycling.

“Mineworx has the only commercial facility for recovering precious metals from catalytic converter scrap without smelting,” states the Canadian Mining Journal.

In 2019, 85% of palladium demand and 34% of platinum demand came from catalytic converters – Johnson Matthey PGM market report February – but currently only 30% of the platinum group metals (PGMs) are recovered.

Ironically, these devices — which are designed to reduce pollution — cause a lot of pollution when they are smelted.

“Feed for its plant comes from Davis Recycling in Tennessee, where the core materials are separated from the metal containers and ground into a fine powder,” added the Journal.

“Platinum and palladium are extracted from the feed using hydrometallurgical methods. The metals are precipitated out of solution and refined prior to sale.” 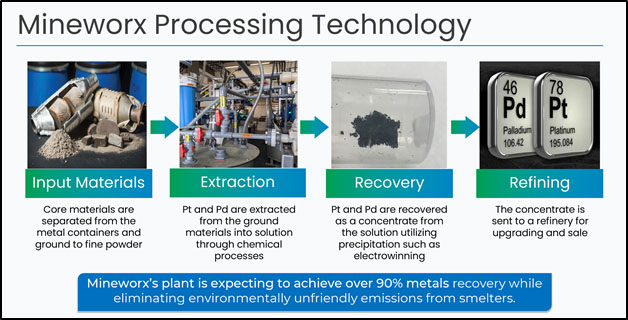 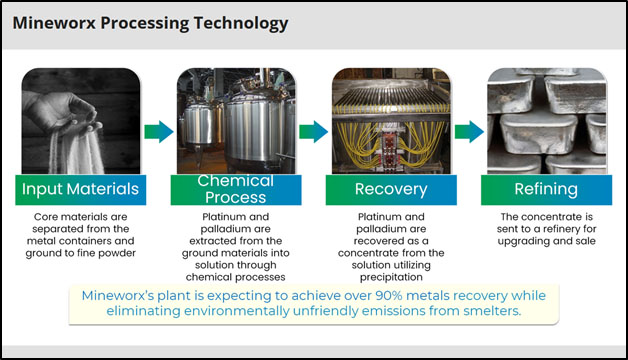 Platinum is currently trading at $1,054 per ounce, while palladium is selling for $2,048 per ounce. 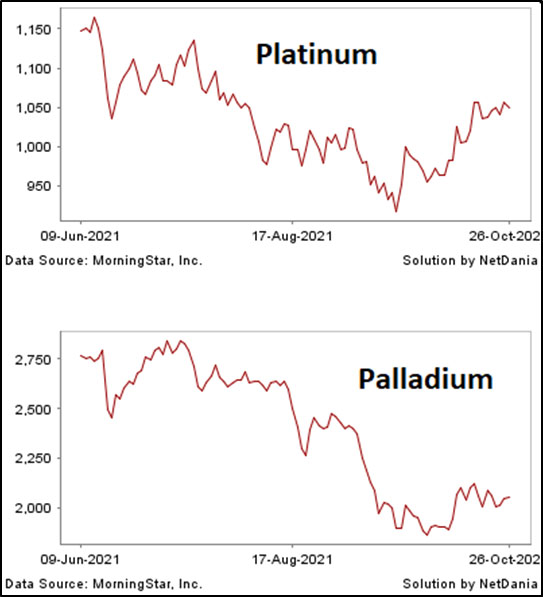 “On the 6-month chart for platinum we can see how just yesterday it broke out from a head-and-shoulders bottom with the chart looking very positive indeed,” chart analyst Clive P. Maund stated in an October 15, 2021, brief.

“It will take a while for moving averages to swing into bullish alignment, so we should not be surprised to see it stop to consolidate at some point when it will be a buy on dips,” added Maund.

“The long-term, 20-year chart has a lot of similarities with the long-term silver chart with the price building out a giant double bottom from 2016 through 2018 but suffering from a freak anomalous break lower in March of last year due to the general crash at that time that was abruptly reversed by massive Fed intervention.”

“It then went on to break out to the upside late last year before reversing back into the base pattern to test support in the recent past from which it now starting to advance again,” stated Maund. 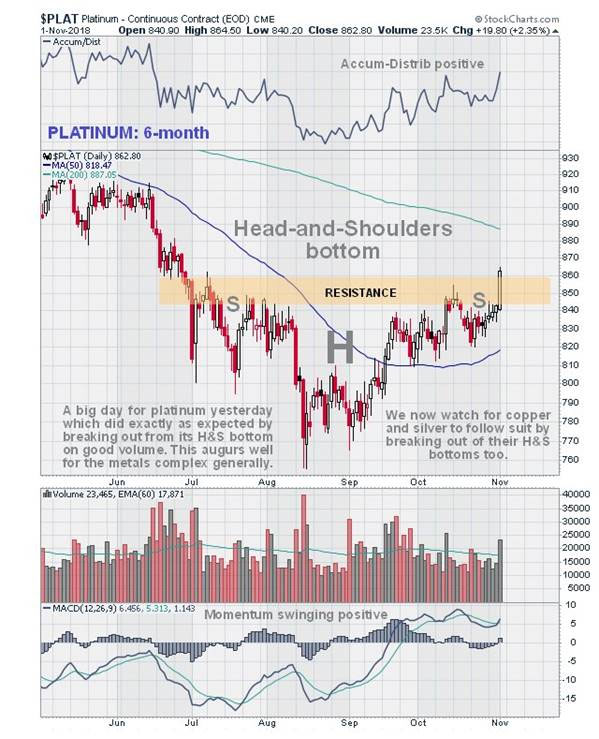 On October 13, 2021, Mineworx announced that its 100L pilot plant has been disassembled, loaded, and has been trucked to Tennessee to begin process optimization, the next phase of testing protocols (stage four).

“The goal of stage four is to review the current design under increasing through-put volumes to identify operational issues and system bottlenecks that could result in inefficiencies in a commercial scale plant,” stated MWX.

“This testing will provide information on design modifications that will need to be incorporated into the final design of the commercial scale plant.”

Mineworx believes that the role of a testing platform in the pilot plant will add value even after the commercial plant has been constructed.

After commercialization, the pilot plant will be used to optimize the technology through various chemistries and processes.

“We have successfully achieved this crucial development milestone and look forward to the successful completion of our pre-commercial phase of testing protocols in Tennessee,” stated Greg Pendura, Mineworx President and CEO.

“The opportunity to become a leader in this industry is an exciting situation for our stakeholders,” Pendura said. 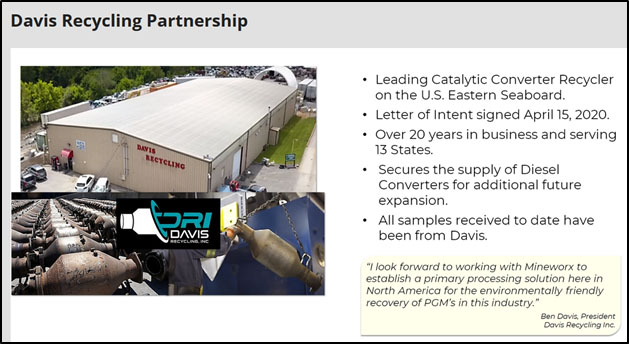 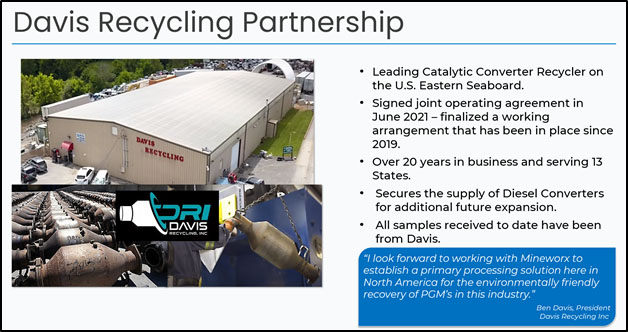 “Sawzall-wielding thieves hacking away at parked cars sent thefts of a key pollution-cleaning part through the roof in the past year,” reported the New York Post.

“The whole process takes under two minutes,” Detective Thomas Kelly of the NYPD Auto Crimes Unit told the Post. “They’re a thief magnet because they include rare metals like rhodium, palladium, and platinum, which trade for four and five figures per ounce.

It’s ironic that the activity of street thieves could be a leading indicator for a smart technology company. But the thieves are searching for quick money and high margins.

MWX is also furthering the development of its legacy iron ore concession, in which it holds a 100% interest in southeastern Spain.

Mineworx has 354 million shares fully diluted (shares/options/warrants) and is approximately 10% owned by insiders. 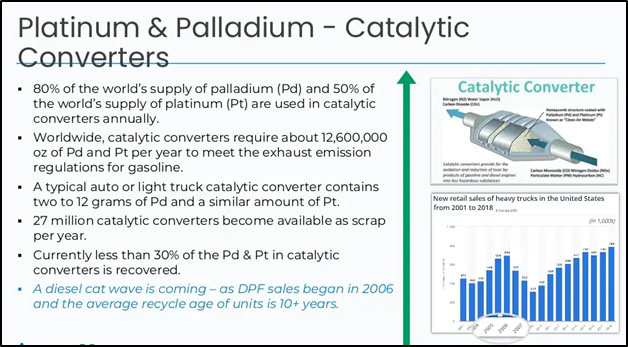 Worldwide, catalytic converters require about 12,600,000 ounces of Pd and Pt per year to meet the exhaust emission regulations for gasoline.

A passenger car contains 2-6g of PGM, while a large SUV or truck contains 6-30g of PGM.

However, a diesel cat wave is coming as DPF sales began in 2006 and the average recycle age of units is 10+ years.

The only current commercial method to recover Pd and Pt from catalytic converters is smelting. However, smelters worldwide currently have limited capabilities, and they are environmentally hazardous.

Diesel catalytic converter units also can create smelter safety issues, because trapped carbon can ignite, causing an explosion and damage to a furnace. As a result, smelters are becoming stricter on penalties or outright rejecting batches that contain diesel catalysts.

Hear what other experts are saying about: