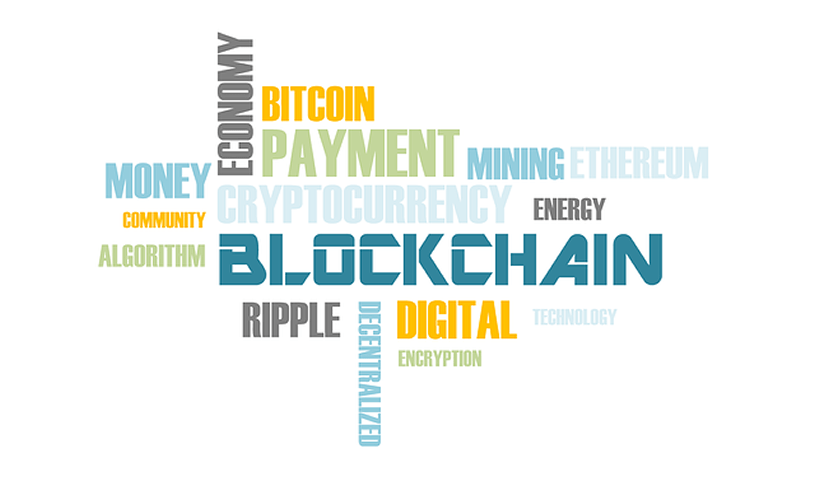 The Summer of CBDCs: Where Central Banks Stand in Their Digital Currency Ambitions

Several CBDC pilots have begun kicking off around the world in recent months. China’s PBOC has already launched the digital yuan to more than 10 million eligible citizens and is working to enable international payments across Asia. It’s also been reported that the Bank of Israel has run tests on Ethereum’s blockchain technology, even utilizing non-fungible tokens (NFTs) for real-world transactions.

As we await preliminary results from the US Federal Reserve’s digital currency tests with Massachusetts Institute of Technology (MIT), some policymakers have already begun to express skepticism, however, insisting that USD-pegged stablecoins already in decentralized circulation may have the answers to many questions CBDCs are meant to answer. 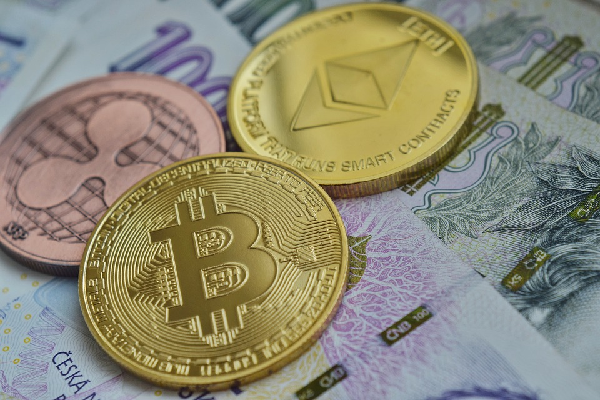 Last week, the International Monetary Fund, Bank for International Settlements (BIS), and World Bank published a paper highlighting the benefits of CBDC. According to the report, “If coordinated successfully, the clean slate presented by CBDCs might – in time and in combination with other improvements – be leveraged to enhance cross border payments.”

That endorsement follows a BIS survey showing around 90% of the world’s central banks are now working on their own digital currencies, some of which may be issued in the next three years.

To receive all of MRP’s insights in your inbox Monday–Friday, follow this link for a free 30-day trial. This content was delivered to McAlinden Research Partners clients on July 14.

CBDCs have surged in popularity, corresponding with the rapid rise of Bitcoin (BTC) and other decentralized blockchain assets. According to Christine Lagarde, the head of the European Central Bank, at least 80 central banks around the world are looking at CBDC adoption.

Perhaps one of the most significant blockchain developments of all time was achieved just last month when El Salvador embraced BTC as legal tender. Following that news, other Latin American nations with largely unbanked populations may also be on the verge of stepping up efforts to legislate BTC’s place in their economies and the global financial ecosystem. In El Salvador, <href=”https://www.streetwisereports.com#:~:text=In%20El%20Salvador%2C%20some%2070,First%2C%20holding%20cash%20is%20risky.” target=”_blank”>some 70% of citizens are unbanked. Not only will owning a BTC wallet create an incentive to save and build wealth, millions would gain access to a secure financial ecosystem never before available to them.

In their development of CBDC networks, many central banks could look toward proliferation of digital payment and banking networks while circumventing decentralized blockchain networks, attempting to build out their own centralized digital plumbing instead. As Quartz notes, a cash-free economy would exclude the 7.1 million Americans, or 5.4% of US households, that are unbanked. Only 28% of transactions involved cash in 2020, and the COVID-19 pandemic only boosted wider adoption of cashless and contactless payment among businesses.

Per Politico, the Federal Reserve Bank of Boston and MIT’s Digital Currency Initiative are aiming to publish the first stage of their work to determine whether a Fed virtual currency would work on a practical level this month — an open-source license for the most basic piece of infrastructure around creating and moving digital dollars.

Though the Fed has largely been tight-lipped about any CBDC developments thus far, some policymakers have already thrown cold water on the idea.

Fed Vice Chair for Supervision Randal Quarles, for instance, said any proposals to create a US CBDC must clear a “high bar,” and that he needs to be convinced the potential benefits would outweigh the risks. Reuters notes the Fed official said the US Dollar is already “highly digitized”, expressing skepticism that a CBDC would help to improve financial inclusion or lower financial costs. As Bloomberg reports, Quarles actually sounded quite bullish on USD-pegged stablecoins already in circulation, stating in a recent speech: “the Federal Reserve has traditionally supported responsible private-sector innovation. . .indeed, some stablecoins have already been structured to address them. When our concerns have been addressed, we should be saying yes to these products, rather than straining to find ways to say no.”

In June, China began a long-awaited crackdown on BTC mining within its borders. While they had threatened such action for the better part of a decade, the threats finally became action when 90% of Chinese miners were forced to cease operations by the Chinese government. As MRP covered last month, this move is not especially consequential for the Bitcoin network since it has automatically adjusted its mining difficulty and all of the computing capacity that was in China will simply be dispersed to other locations over time.

However, many have speculated this strong-handed action was ultimately meant to clear the way for the People’s Bank of China’s (PBOC) digital yuan project, in development since 2014. Thus far, the first real-world trial of the Chinese CBDC has reached 10 million citizens as the PBOC has distributed ¥269 Million ($41.5 million) in digital currency. Bitcoin.com reports that selected merchants in Beijing’s Wangfujing business district, as well as the online marketplace JD.com, have started accepting digital yuan payments.

One of other banks furthest along in testing of CBDCs is the Bank of Israel (BOI), which has reportedly been experimenting with Ethereum’s (ETH) blockchain technology. While the BOI’s report from May makes no mention of ETH (likely to avoid making an endorsement of any specific digital asset), Cointelegraph notes that a section of the text reads: “the various opportunities that a digital shekel could offer for the innovation of the payments system in the Israeli economy include smart contracts, programmable money, and the like.”

Deputy Governor of the BOI, Andrew Abir, has said there is “less than a 50% chance“, the bank ever allows a digital shekel into circulation. Israeli financial news site Globes reported that the BOI successfully tested its ability to program a car ownership certificate transfer using nonfungible digital tokens (NFT) and completed a transaction wherein an NFT payment was made the condition of the certificate’s transfer and vice versa.

This was a significant step toward utilizing smart contracts for autonomous transfer and ownership of real world assets. As MRP highlighted back in April, NFTs’ transparent pricing and seamless transferability make it feasible that blockchain technology could revolutionize the execution of real estate sales. Property and buildings in the so-called “metaverse”, tokenized as NFTs, are selling for millions of dollars’ worth of digital currencies and many enthusiasts are now working to bridge the gap between the digital and physical realms.

Institutional Stablecoin Use Taking off Within the Financial System

It is also worth noting that institutional blockchain currencies being developed for the financial system, particularly in the realm of stablecoins, are nothing new. As MRP noted two years ago, JPMorgan’s JPM Coin became the first US-bank backed cryptocurrency in 2019, with focus on using the token to facilitate wholesale or interbank fund transfers.

In October 2020, JPMorgan announced JPM Coin was being used in commercial transactions. The bank then launched a new subsidiary, Onyx, to handle its bank settlement blockchain platform, Liink. Just last month, Goldman Sachs Group, one of several financial institutions to sign on to JPMorgan’s custom blockchain service, begun trading in repurchase agreements that use smart contracts and a digitized version of the US dollar.

Since December, Bloomberg reports JPM and Onyx’s blockchain platform has gone on to trade more than $1 billion a day. The firm is speaking with more than 10 banking and investing clients about joining the repo network, according to spokeswoman Jessica Francisco.

Amid a boom in institutional adoption, the proliferation of blockchain technology, and an oncoming boom in crypto firm IPOs and other public listings, MRP is re-iterating our LONG Digital Payments theme – which we added to our list of themes on February 5, 2021.

We want to be clear that this theme is NOT a theme on BTC or any other individual cryptocurrency. Rather, our Digital Payments theme is meant to track the growth of businesses adopting blockchain technologies at various levels throughout the digital asset ecosystem.

We will track this theme with the Amplify Transformational Data Sharing ETF (BLOK), a diversified ETF that provides exposure to several different players in digital payments: blockchain-based mining firms, major payment processors, hardware producers, institutional investors, and even leading ecommerce platforms that accept digital assets as payment. By using this ETF, the performance of our theme will not be totally dependent on day-to-day price changes in digital assets like BTC.

Since the launch of our theme, BLOK has generated a return of +1%, thus far underperforming the S&P 500’s gain of +12% over the same period. 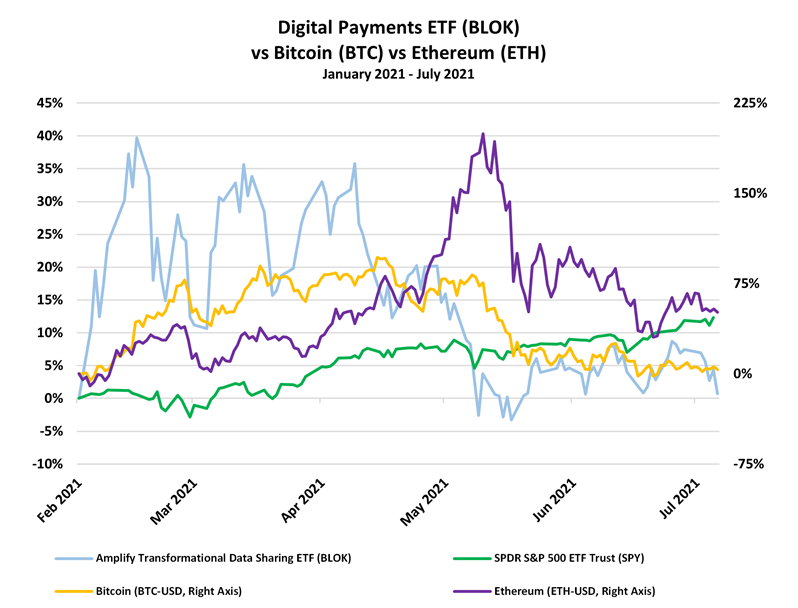 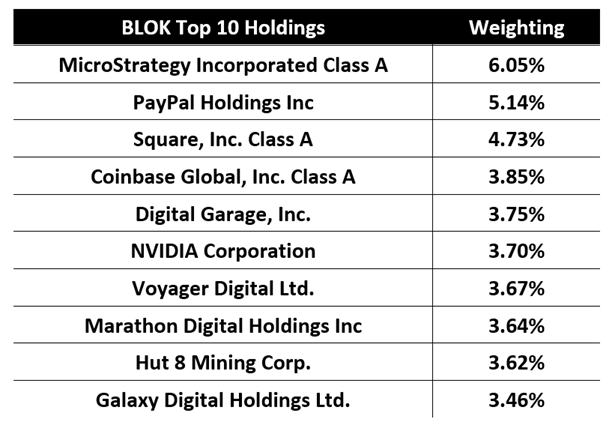 McAlinden Research Partners (MRP) provides independent investment strategy research to investors worldwide. The firm’s mission is to identify alpha-generating investment themes early in their unfolding and bring them to its clients’ attention. MRP’s research process reflects founder Joe McAlinden’s 50 years of experience on Wall Street. The methodologies he developed as chief investment officer of Morgan Stanley Investment Management, where he oversaw more than $400 billion in assets, provide the foundation for the strategy research MRP now brings to hedge funds, pension funds, sovereign wealth funds and other asset managers around the globe.

McAlinden Research Partners:
This report has been prepared solely for informational purposes and is not an offer to buy/sell/endorse or a solicitation of an offer to buy/sell/endorse Interests or any other security or instrument or to participate in any trading or investment strategy. No representation or warranty (express or implied) is made or can be given with respect to the sequence, accuracy, completeness, or timeliness of the information in this Report. Unless otherwise noted, all information is sourced from public data.
McAlinden Research Partners is a division of Catalpa Capital Advisors, LLC (CCA), a Registered Investment Advisor. References to specific securities, asset classes and financial markets discussed herein are for illustrative purposes only and should not be interpreted as recommendations to purchase or sell such securities. CCA, MRP, employees and direct affiliates of the firm may or may not own any of the securities mentioned in the report at the time of publication.